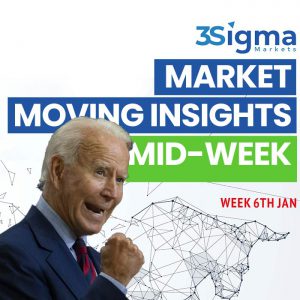 The New Year has begun with a mixed reaction in markets. The primary movers of markets sentiment at present are the Covid-19 virus third wave hitting Europe and the US Senate runoff taking place in the State of Georgia. The UK-EU Brexit trade agreement has resolved a large amount of the problems that had been holding back sentiment, but the concern has been replaced by the rising outbreak in the UK and wider Europe. The UK mutant strain, which is up to 70% more transmissible, has combined with socialising around the holidays to create a surge in cases that has placed the NHS at the risk of being overwhelmed in a few short weeks. This has triggered a national lockdown in the UK which has included schools. There is also the possibility that a more severe lockdown may be needed in the days ahead. Today the cases count in the UK came in at 60,916, a new record, which equates to just under one-thousandths of the population. In the US, the US Senate runoff for the two seats up for grabs in Georgia is proving to potentially be a decisive moment. The party that takes the seats will effectively gain control of the Senate. With the Democrats already in control of the House of Representatives and Democrat President-elect Biden about to be sworn in to the White House, winning control of the Senate would mean that Democrats would have unchecked free reign to do what they wished with the country. The market is pausing to see the outcome of this race, which should be known this afternoon if the count goes smoothly. However the wait is taking place under volatile market conditions with sharp moves in prices so far in the New Year. The result of the Senate race may yet be a source of civil unrest, particularly in Washington D.C. as protestors are gathering ahead of the certification of the Electoral College Presidential vote later today.

The NZDUSD FX pair is currently breaking higher after moving past the important 0.7000 level. The pair is strengthening through resistance and approaching the 0.7300 level. A confirmed breakout above this area has opened the way to initial resistance at 0.7340 followed by the 0.7400 area. The 0.7450 level may provide a target along the way to the more ambitious 0.7500 area. Alternatively, a move back down under 0.7230 may find initial support at 0.7200. The 0.7168 level has been used as support and resistance during recent days. A failure at this level might hand control to sellers and possibly open the way to 0.7100. The 0.7000 area is of great importance as the 50 EDMA is closing in on the level. The Georgia runoff election will be a key driver of the pair in the coming days.