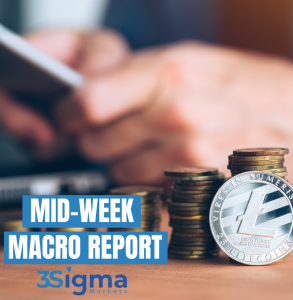 The equity indices sold off over the last two days once again as volatility reigns supreme. The selloff is linked to a fall in crypto-currencies with Bitcoin falling under the $44,000 level on its way to test $40,000 – which we have dipped under this morning – forming a triple intra-day bottom that is acting as support for the time being just ahead of $39,000. The initial decline is of course linked to a twitter battle involving Tesla boss Elon Musk after the rejected the crypto as a form of payment for his cars. This has become an environmental issue surrounding the energy intensive mining process of the crypto. This spat could not have come at a worse time for the crypto space, as it coincided with the personal tax payments deadline in the US on 17th May – these tax payment obligations would have forced many investors to free up some capital in order to make the payment – liquidating some of the markets favoured positions – cryptos and tech stocks. This is evident in the performance of both over the past week.

The markets are churning close to all time highs as traders are forced to take profit in order to square positions/accounts and limit risk. Leverage remains at all time highs and this is potentially a recipe for more volatility ahead across a range of markets. There have been little in the way of developments on the economic front apart from the inflation reading ticking higher alongside evidence of higher prices and rising wages in the US. The US FED has committed to its thesis that this rising inflation will be transitory and that overall inflation will move up to the 2% to 2.5% heading into 2022. However a more rapid rise in inflation would give the FED cause for concern and this may lead to them having to taper sooner than anticipated. There are elements within the markets that think the FED is making a mistake and backing itself into a corner. FED Member Clarida said on Monday that he expected inflation to rise due to transitory factors and so the FED would not act in such an event. However he added that he would instead focus on the employment data as his metric for deciding when to take action on tapering. The FED is as such classifying inflation data as noise due to the reopening and that the data is essentially distorted by the response to Covid. The unique dynamics of the current economy are triggering a wait and see response in the FED as they attempt to wait out the distorted data. However this may lead to them being far behind the curve when it comes to taking action on inflation, potentially creating a dangerous outcome for the economy.

The EURCHF chart is showing how the pair has moved lower over recent weeks and is now trading at 1.0985 and testing resistance at the 50 EDMA. The 1.0990 level is expected to act as resistance and 1.0955 area is the initial support area. The pair may find resistance at the 1.1000 area on a break higher. A continued move higher may find more resistance around the 1.1050 level followed by the 1.1075 area. Alternatively a move back down under 1.0950 may find supports between 1.9040 and 1.0926. A loss of this level may extend the control of sellers and possibly open the way to a test on 1.0900. Below this level the 1.0890 area may play its part as support ultimately followed by 1.0870.