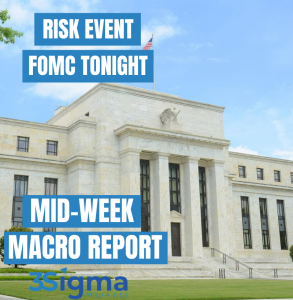 The markets will be focussed on the main event this week as the FOMC meets to decide on the direction of monetary policy this evening – decision released at 7.00pm BST, with Fed Chair Powell’s press conference at 7.30 pm BST. The market is expecting a relatively dovish FOMC and this may manifest itself as the FOMC continuing to reassure the market that inflation is transitory. However inflation is continuing to increase despite the FOMCs views that it will dissipate once the supply bottle necks are reduced. In fact these bottlenecks are expected to worsen over the summer and into next year and consumer and corporate demand outstrips supply. The unintended consequence of shutting down the economy to deal with Covid has led to rising inflation and an addiction to monetary and fiscal stimulus. With fiscal stimulus set to continue and even increase, the market is focussed on any hint that monetary policy will be tapered, which may lead to a decline in risk taking sentiment and a unwind of positions. The challenge of the FOMC is how to taper policy without crashing the markets, in particularly the stock markets. The FOMC is focussed on employment and is less concerned with inflation but arguably inflation should be its primary concern. The inflation narrative is slowly coming back into focus for the committee and the dot plot releases today may show that the FOMC will shift towards tightening next year. With the economy recovering and the vaccination programme accelerating it could be the perfect time to broach the issue of tapering monetary policy. The market’s reaction to this will be a key driver of sentiment over the summer. As mentioned above the market is putting a low probability on the subject of tapering and reducing stimulus, as can been seen by the fresh highs made in both the Nasdaq and the S+P 500 this week and the fact that US 10 Year Yields are now below 1.50%. It appears from now that the Fed’s message that inflation will be transitory is finally getting through to the majority of market participants – all eyes this evening’s risk event.