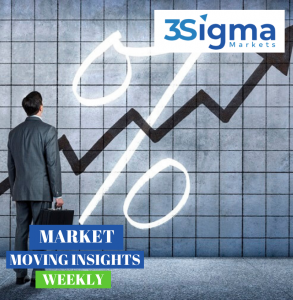 The equity indices are still chopping around in tight ranges at their all time highs this week as they await further earnings reports from US companies and the FOMC’s view on the market this evening. Earnings reports in the US have so far failed to move the market to any great extent. After the market closed yesterday the focus narrowed in on the earnings from Google which beat estimates and rallied, followed by Microsoft which also beat its estimate but whose share price sold off.  US equities have failed to get excited by more stellar results from the tech sector. The Nasdaq failed to make fresh highs this week – are we fulIy priced in here? The market will continue to focus on earnings this week as the large FANG tech companies continue to report. However the FOMC will attract attention later today as the FED decides how to gauge the economy going forward. With improvements in unemployment and consumer spending expected to continue as the vaccine is rolled out, the FED will have to start considering tapering asset purchases in the months ahead. The market will be zoned in on the FED’s signals as to when this may take place. The FED continues to state that the rising inflation is transitory, caused by production and supply disruption due to Covid-19. However there is also inflation that is driven by the flooding of the market with liquidity from monetary and fiscal stimulus which may be less transitory and may have a longer lasting impact on the economy. The FED will eventually have to deal with this by rising rates and it may take the government to act to decrease regulation if inflation gets too hot for the FED alone to handle. The market is on tender hooks this week and is unlikely to make a clear break higher or lower until it has a more solid handle on the economic landscape with earnings and the FED. The US 10 Year has also risen back up to 1.64% and looks to test 1.7% followed by 2.0%. This may disrupt the rally in tech and spill over in FX through a rally in the US Dollar. We are already seeing the first signs of this particularly in USD/JPY – US yields have begun to rally again into the Fed meeting this evening as the market anticipates that the Fed’s hand maybe forced earlier than they are outlining to the market and this move in US rates has wide spread consequences for all markets. It will be interesting to see how Fed chair Powell deals with questions surrounding this topic in the press conference post announcement.