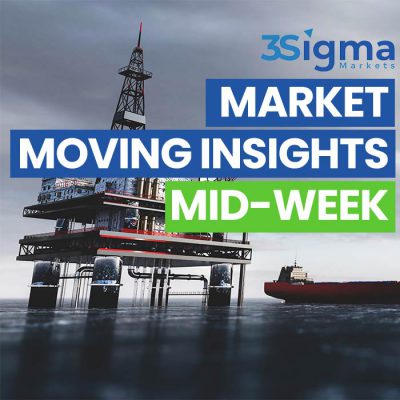 The markets are shifting their focus to inflation as the rise in commodity prices in recent days has created ripples. The blast of cold air across the US has exposed the weaknesses in US production and delivery of energy products. Oil production has been shut down in Texas and this has led to supply disruption at the pumps. The gas supply has been diverted to households so that the heating can remain on, but at the expense of power plants which has resulted in days of blackouts in some parts of the US. The drift higher in energy prices has been occurring since Oil prices went negative in H1 2020, with the chart showing the price forming a bull flag along the way. The leg higher that began in October has put pressure on the economy and increased the prospect of higher inflation. The market is somewhat nervous of increases in inflation and this is seen as a drag on the economy and markets. The FED’s policy of keeping rates lower for longer will come under severe pressure as inflation rises and they may have to deviate from this plan and increase rates ahead of the expected 2023 time frame. However, the Fed is likely to see the rise in energy prices as “transient” and attempt to ignore this dynamic. The issue is that the fundamentals in the Oil market in particular point to higher prices as supply is restricted. For one, OPEC is determined to reduce supply in a time where the re-opening of economies following Covid-19 lockdowns will create a higher level of demand. The supply is also being restricted as infrastructure is canceled, e.g.; the keystone pipeline. This amounts to the potential for higher inflation and the FED being forced to act ahead of time and increase rates. The result of this could have negative implications for the economy and asset prices. This 2021 reflation trade has become evident in US yield curve and we have seen 10 Year US Yields hit a 1 year high over night in Asia at 1.33%. The increase in US yields has far reaching consequences for the broader financial markets – most notably the Stock Markets.