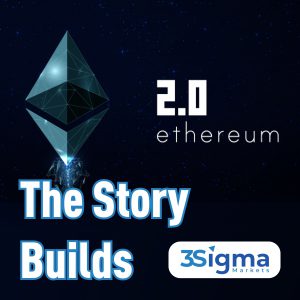 More than 4 million ETH is blocked for staking in Ethereum 2.0

More than 4 million ETH has already been blocked for staking in the Ethereum 2.0 deposit contracts. This amount has more than quadrupled since the launch of the “signal chain” in December

According to CryptoQuant, as of the end of April, the validators of Ethereum 2.0 blocked 4 million ETH worth about $13.5 billion at the current exchange rate for staking.

Ethereum 2.0 is an ambitious multi-year network upgrade plan that aims to move the Ethereum blockchain from the current proof-of-work (PoW) consensus to the Proof-of-Stake (PoS) algorithm. This will significantly reduce power consumption, and potentially lead to lower transaction fees and increased network bandwidth.

Currently, ETH 2.0 is in the first phase, dubbed Phase 0. The Beacon Chain Ethereum 2.0 was launched in December, a week after more than 524,288 ETH were blocked in the Ethereum 2.0 deposit contract, and more than 16,384 validators expressed their willingness to join the network. At the time of launch, 881,569 ETH are blocked in the deposit contract, and 21,063 validator nodes are active in the main network.

Since then, the inflow of ETH into the Ethereum 2.0 deposit contract has increased significantly. By the end of December, 2 million ETH were blocked for staking in Ethereum 2.0, and in February – 3 million ETH. The ongoing ETH rally has significantly increased the dollar value of the ethers blocked for staking. In December 2020, ETH was trading around $600, and now in May we are trading up towards $3,400 – fresh all time highs – with many investors believing this is only the beginning, with prices set to rival those of Bitcoin – watch this space.